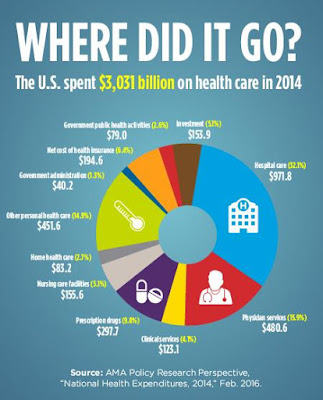 While the 8-figure salaries for the CEOs of the largest insurers might be considered some kind of moral issue, financially it has zero impact on national health costs.

To make any meaningful reduction in overall costs, hospitals, doctors, pharmaceuticals and other components would need to be addressed. Those reductions would be hard, and more important for this discussion, any reductions in those areas could be made equally well whether health care is administered publicly or privately.

Sanders etc. could have proposed a system like the Veterans Administration health care system where the government owns the hospitals, and the doctors are government employees, but that is not their proposal. Their proposal (fortunately) does not nationalize doctors or hospitals, so there are no inherent savings in these areas (and the Veterans Administration health care system certainly has its own scandals, and cost overrun issues).

Sanders and Warren also have proposals to force the pharmaceutical companies to lower prices (which also has some very complex issues), but again this is completely divorced from their assault on insurance companies.

and no, I am not an employee of an insurance company or have any financial interest.

Posted by Jonathan Lockwood Huie at 6:38 PM No comments: