What's So Bad About Global Warming? 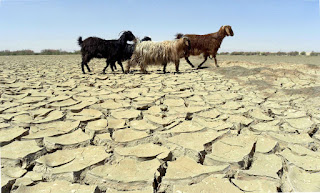 The last time the average temperatures on our planet were 4 degrees warmer than they are now, palm trees grew in the Arctic.[1]  Would that be a bad thing? Let's look deeper...

Suppose that Earth were uninhabited, and a band of humans were just a arriving from somewhere else, AND that this uninhabited Earth was 4 degrees warmer than today's Earth and the average temperature was stable from year to year.

This bunch of newcomers would find Siberia and Greenland and Alaska and Northern Canada to be quite pleasant places, and would probably settle there happily. They would also find all of the Middle East and half of Africa, and half of eastern and southern Asia to be completely uninhabitable - crops could not grow there and humans could not survive long there outside of an air conditioned environment. That wouldn't be a problem for these newcomers in the same way that Antarctica's uninhabitability is not a problem today.

Our newcomers would also find dry land and oceans with shorelines as the demarcation between the two, so they would locate their settlements appropriately. They wouldn't care, or even be aware, that the shorelines were miles inland of 2020 shorelines.

They would also take advantage of the lakes and rivers, and the rainfall patterns they found. And they would take appropriate precautions against the prevailing pattern of hurricanes and other storms. Again, they wouldn't care, or even notice, that both the blessings and the hazards they found were vastly different from those in our 2020.

Could this newly found Earth support as large a population of humans as our current Earth does? Probably not, but that is NOT our BIG problem.

The Problem Is Rate Of Change

If Earth's average temperature were to climb by 4 degrees over the course of millenia, we humans could probably adapt fairly well. Coastal cities would very gradually decline and populations would move inland and further from the equator. Farms in warmer areas would very gradually decline while farms in Canada and Russia boomed. The entire population of the Middle East (and much of Africa and eastern/southern Asia) would very gradually migrate to more fertile and inhabitable parts of our planet. These migrations, undertaken over the course of millennia, would not be that different in kind from the population movements over the last several millennia.

But what if a 4 degree rise in average temperature takes place over the course of only a few decades? We will probably rescue the relatively few people living on low-lying island nations, but will we have the morality, or even the means, to rescue even the hundreds of millions of people of the Middle East, let alone the billions living in other hotter and drier parts of our world? Or will we condemn those people to near certain death by barricading them in lands with no means to grow food and incompatible with human life without mechanical air conditioning? Before they starve, those people would resort to ever more intense wars over what little fertile land and food remains.

And in our own country, what about the costs and logistics of relocating a third of our population away from the coasts? And what about our own farms becoming increasingly less productive? And the changes in rainfall and storm patterns? Consider the human costs and the economic costs.