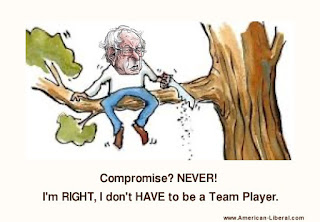 First the "ANY Democrat" part...  Never let our disagreements over the best choice for the optimum Democratic candidate get in the way of our shared commitment to rid our country of the most criminal, immoral, and incompetent POTUS in American history. Whoever we Democrats nominate as our candidate, we MUST ALL pull together to VOTE Democratic in the General Election on Tuesday, November 3, 2020 AND to enthusiastically encourage ALL of our like-minded friends and family to do so also.  I commit to campaigning for and voting for our Democratic nominee, whoever our nominee is, and I urge all Sanders supporters to make the same commitment! (Sadly, a recent poll shows only 53% of Sanders supporters are willing to make that commitment. https://www.newsweek.com/bernie-sanders-poll-warren-biden-2020-nominee-emerson-college-1483831)

The reasons why I believe that Bernie Sanders is the worst choice among all our Democratic candidates...

1) Electability. Bernie fans certainly argue with some credibility that Americans are ready for the radical change that Sanders proposes and that he would bring out new voters. Certainly some of his most rabid enthusiasts will choose to boycott the General Election if the Democratic nominee is someone other than Sanders. However, I believe that the preponderance of evidence shows that we Democrats would fare far worse in the General Election if Sanders were our candidate...
a) Independents would generally find even the hideous Trump less objectionable than a "Socialist," as all the Republican ads will certainly label Sanders.
b) Mainstream Democrats would be much less enthusiastic about supporting Sanders, and turnout would be much lower.
c) Hard-core Trumpites will vote for Trump no matter what, but having Sanders as our candidate would increase the GOP turnout among those Republicans who don't especially like Trump, but who would strongly vote for him to avoid a "Socialist."
Anyone who doubts the extent of the fear and loathing that the label "Socialist" conjures up in mainstream America is truly out of touch with the reality on the ground across our country. The sentiments of white intellectuals and of anyone who participates on Twitter are totally divorced from the rest of our country.

2) On most domestic issues, ANY President is more a cheerleader than a dictator. Congress, not the President, makes our laws. Whatever anyone thinks of Sanders proposed "policies," the reality is that...
a) The majority of Congressional Democrats (let alone Republicans) do not support Sanders' proposals. That would make those proposals dead on arrival.
b) Sanders' track record for working with his Senate colleagues is very poor. Senators do not appreciate Sanders' my-way-or-the-highway attitude. It is probably true that no Democratic President will get any support from any Congressional Republicans, but having a great relationship with Congressional Democrats is a prerequisite for success.

3) Sanders' proposed "policies" flout the principles of economics and the lessons of history. As one of the most egregious examples, I point to national "rent control," a policy which virtually all economists condemn because a few people can rent apartments at a bargain price, but then the supply runs out before everyone gets a place to live. And the situation rapidly gets far worse as landlords suffer from the price of rent being set below their cost of providing homes, stop building any more rental units, and (unless prevented from doing so by an even more disruptive law) convert existing rental units to other uses. We have a housing shortage, and need to provide incentives to build more housing units rather than fewer.
I also point to Sanders' very Trumpian isolationist opposition to international trade. International trade has a strongly positive net effect for Americans. Export-oriented jobs (including farming), hospitality and transportation jobs, lower consumer prices, etc. FAR outweigh any possible job gains from becoming isolationist. AND, encouraging international trade is a moral imperative to sharing our good fortune (on a win-win basis) with the developing world.


Posted by Jonathan Lockwood Huie at 11:38 AM